If you ever watch professional poker tournaments on television you might have seen someone nursing a small stack of chips and in big trouble. It’s right about then that you hear one of the announcers say “He’s got a short stack, but all you need is a chip and a chair!”

It’s an interesting saying. I found out that this saying was created because of a man named Jack Straus. Jack Straus was a professional poker player that won the World Series of Poker back in 1982. At one point in the tournament, Jack had gotten a bad run of cards and ended up with just one chip left. The other poker players joked with him about it and everyone pretty much wrote him off. They were all sure that Straus could not come back and win with only one chip left. He was done for.

Or so they thought. Jack was indeed in trouble. But did he give up? NO. He refused to give up. He refused to fail. He didn’t get rattled. He played his game and he ended up coming back to win the most high profile poker tournament on the entire planet. He earned his World Series gold bracelet and joined an elite class of players. Why? Because he never gave up. Things may have looked bad when he looked down at that pitiful looking little lonely ass chip. But he had been in games before where things looked bad and he had turned it around. He knew that even though he had just one chip, HE WAS STILL IN THE GAME.

So the next time things look bad for you, and you think your life is over, the next time you feel that all hope is lost, the next time, God forbid you feel suicidal…  just remember Ol’ Jack Straus. The man who the phrase was named after.

ALL YOU NEED IS A CHIP AND A CHAIR. 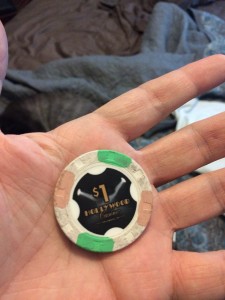